Never too late for a new career!

I’d been messing around with films since about 1980 when Jack McCoy asked me to write the narration script for his and Dick Hoole’s second surf feature, Storm Riders. During the ‘90s I also started working sporadically in sports TV, eventually becoming a writer for Nine’s Wide World of Sports.

This in turn led to gigs scripting presenters on Commonwealth and Olympic Games broadcasts, starting with the Kuala Lumpur Commonwealth Games in 1998 (when I worked with a new kid on the block and pain in the butt called Eddie Maguire) and ending with the Gold Coast Comm Games in 2018, after which I decided it was too stressful for an old bloke! Incidentally, I paired up with Eddie again in London for the 2012 Olympics, by which time he’d become a consummate broadcasting professional and was a pleasure to work with. 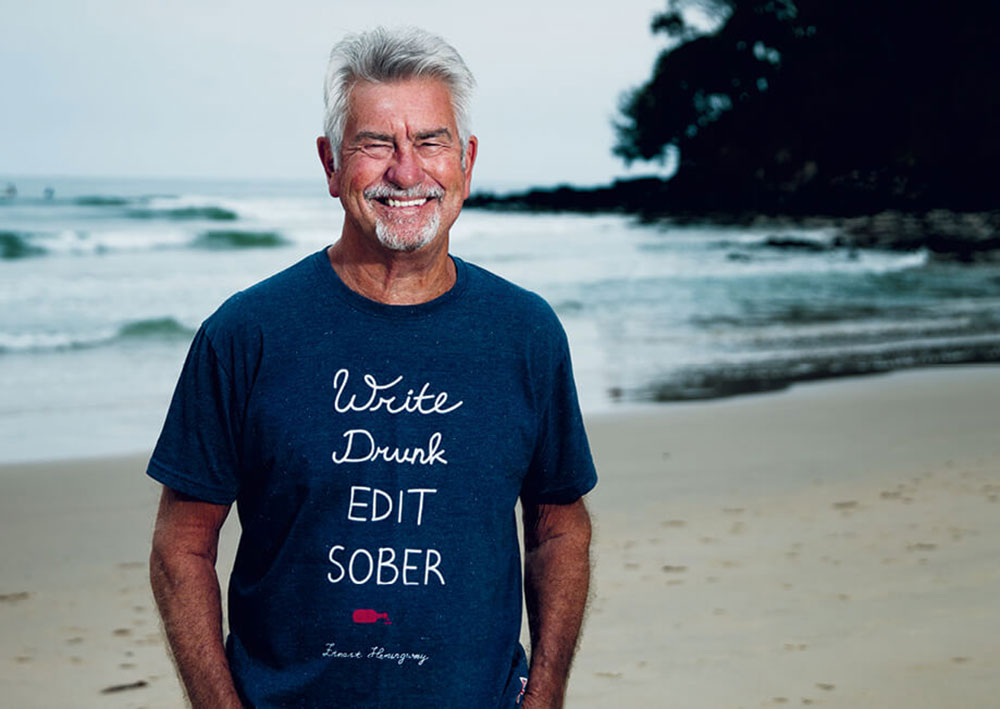 In the early years of the new century I wrote narrations for Shaun Tomson’s Bustin’ Down The Door (read by Edward Norton) and Robert Raymond’s Going Vertical before finally trying my hand as a writer/producer, making promo videos for the Noosa Festival of Surfing with the massively talented Shaun Cairns from Panga Productions, a little commercial production studio in Tewantin.

I got along like a house on fire with Shaun, an excitable South African who was almost a one-man-band, shooting, directing and editing while better half Carol did the styling and ran the office. By 2014 we were a finely-tuned machine, which we proved by making the silliest surf satire ever seen, which went viral on YouTube. Quiksilver’s sister brand Roxy had just made an even sillier promo for the Roxy Pro France event, which showed Steph Gilmore getting out of bed and getting ready to go for a surf, to some sexy Euro beats. Shaun and Carol came up with the brilliant but personally embarrassing idea that we should take the piss by casting me (then aged 63) in the Steph role and shooting it for a surf festival promo. You can watch it here: 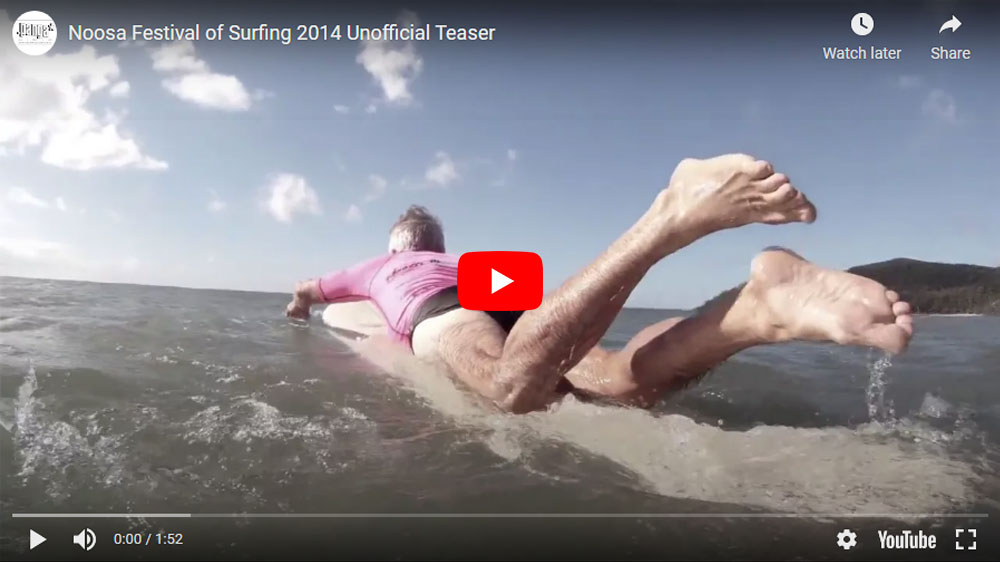 2014 was also the year that we started producing book promo videos, and since I published two books that year, we were rather busy. First we flew to Sydney to film key scenes around the city and Freshwater Beach for That Summer At Boomerang, my story of Duke Kahanamoku’s historic 1914-15 tour of Australia and New Zealand. Next I met up with Shaun in Bali, catching him on the way home from a Mentawais surf mission, and we spent a week shooting a promo for Bali Heaven And Hell, soon to become a bestseller.

Unfortunately, Shaun had perforated his ear drum getting slammed on the reef, so he kept losing balance and falling over while filming. But we got there, finishing the job when old mate John Sheerin (the voice of the Commonwealth Bank) flew over to record the narration in the barber shop at the Deus Temple of Enthusiasm in Canggu, the best acoustics we could find. You can find the Boomerang video here:   and the Bali one here: 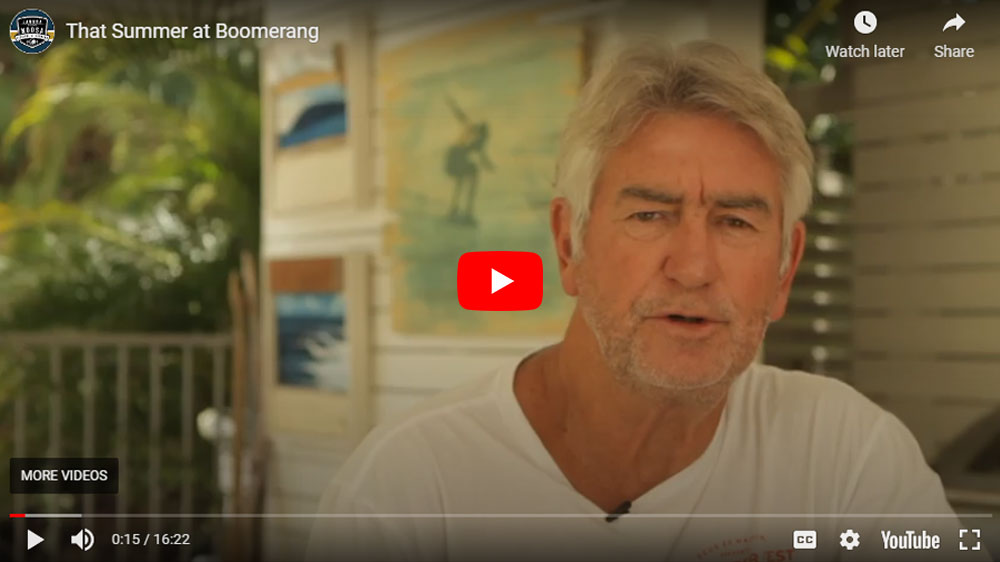 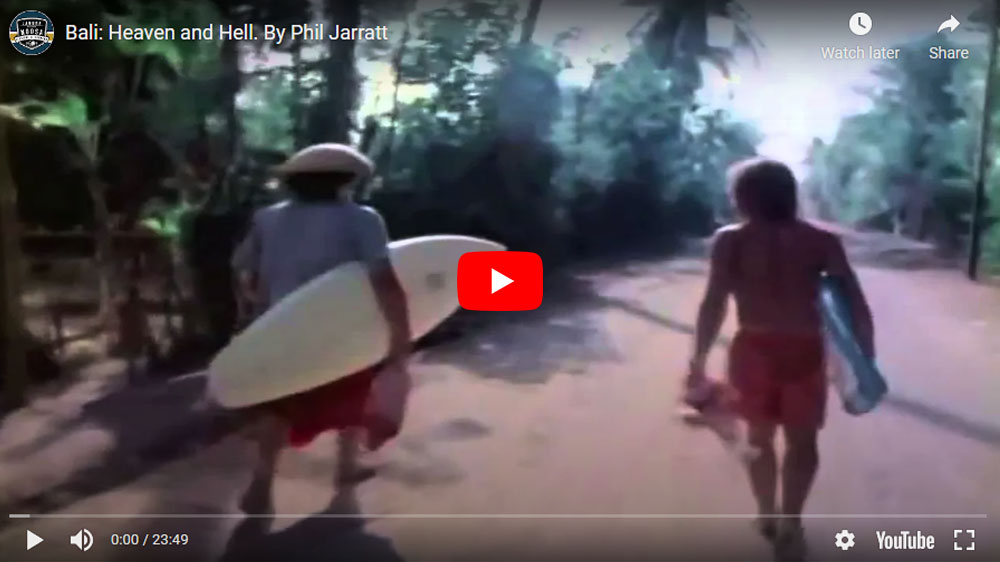 Shaun and I have continued to produce promotional videos for every book I publish, and you can find the ones for Life of Brine (2017) and Place of Shadows (2021) here

In 2015 we managed to get some tourism funding to make a TV-length documentary promoting the Noosa Festival of Surfing, and our good mate and huge supporter of the festival Layne Beachley flew to Noosa to be our presenter. The end product, 8 Days of Pure Stoke, aired on the Seven Network and also played on Qantas and Virgin inflight programs at different times. We also chopped it up into webisodes. In this one, tandem champ Freddie Branger explains to Layne how he picks up chicks at the beach. (This was pre-PC!). video 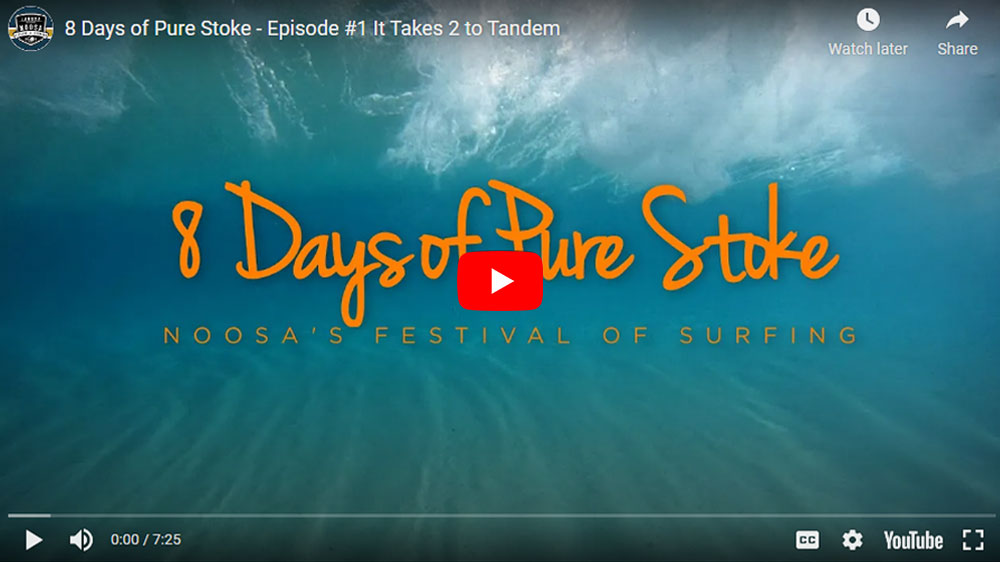 Shaun and I were right into the swing of it now, and I had a great idea for a documentary that I thought would have broad appeal beyond the core surf market. Through writing various surfing histories, I’d become close to several of the true pioneers of the Australian surfboard industry, including Noosa’s own Bill Wallace.

Shapers & manufacturers like Bill, Gordon Woods, Barry Bennett, Scott Dillon, Denny Keogh and Greg McDonagh, had started out in Sydney in the 1950s making hollow okinuis and then balsa boards, before foam became available. These were our “men of wood & foam” and I felt their stories needed to be told before it was too late.

In the spring of 2015, I had a call from a guy who’d done odd jobs for us at Tracks in the ‘70s while at university. We’d stayed in touch & Brian Walsh was now the creative head of Foxtel. He asked me if I had any ideas for surfing-related content. Well, as a matter of fact

Over a long lunch at Sails on the Noosa beachfront, Brian agreed to fund our film Men of Wood And Foam for Foxtel’s History Channel. I learned more about film-making over the next horrendously busy 12 months than I could ever have imagined, and I still didn’t know much! But we stumbled through, mostly just the two of us on the road, although we did seek help from surfing buddies like Mark Warren and Matt Chojnacki.

As the film took shape I realized that we needed a strong musical soundtrack that reflected the surfing genre and the times, but when I discovered how much it was going to cost to license a minute and a half of Little Pattie singing He’s My Blond-Headed, Stompie-Wompie, Real Gone Surfer Boy, I also realized that we couldn’t use the original music. Through my role as director of the Noosa Festival of Surfing, I’d developed a strong relationship with the great bunch of surfing musicians who called themselves the Band of Frequencies. I knew they had the talent and the soul for the job, I just had to educate them about all this cool music that happened long before they were born! I even wrote the lyrics for the anthemic title track.

We recorded the whole soundtrack over three beer-assisted nights at Paulie B’s tiny Lord Tanuki studios in Brisbane, and it was fantastic. The Freaks absolutely nailed it. You can watch the live recording of the title track here -

Men of Wood and Foam was launched at a Foxtel party at Freshwater Surf Club at which the Band of Frequencies played songs from the soundtrack and backed Little Pattie when she did her short set of stomp hits and got us all dancing in the moonlight. The film debuted on the History Channel over the summer of 2016-17 and the band and I toured a film and live music show around Australia and to Bali. A high point for me was having it chosen for the prestigious Santa Barbara Film Festival, where surf brand Vissla and Shaun Tomson hosted a pre-screening party and ensured that many of California’s pioneer surfboard manufacturers attended.

The low point was that by the time we’d finished the Wood & Foam tour, three of the “Brookvale Six” had passed away, as well as featured surfer/shapers Midget Farrelly and Joe Larkin.

In 2014 in Bali I’d met an Australian human rights lawyer named Patrick Burgess, who with wife and women’s advocate Galuh Wandita ran an NGO called Asia Justice and Rights out of Bali. As fellow surfers, Patrick and I became friends and spent a lot of time over post-surf coffees talking about how we might film the issues they were fighting for. It boiled down to a story about Timor-Leste, where Patrick and Galuh’s relationship had blossomed during the dangerous final years of the Indonesian occupation. Now AJAR had a Timor office and they were actively engaged in repatriating the “stolen children” to reconnect with their island home, as well as helping the Timorese deal with the aftermath of years of violence against them.

We battled for years to make the documentary we called Generation 99, and finally completed it, with the assistance of the government of Timor-Leste, just in time to premiere it at the 20th anniversary of the independence referendum in August 2019, where it was well received. Shaun then spent the rest of the year re-cutting the end scenes to incorporate the anniversary, and finessing the soundtrack of beautiful Timorese music performed by the island’s biggest musical stars.

We were about to enter it in as many 2020 film festivals as would have us when Covid-19 struck. Nearly two years later we are still waiting to screen it more widely, but I am hugely proud of this little film, and I love its depiction of a brave, proud and talented group of people who lived through hell. You can watch a trailer for it here -

Shaun Cairns and I still have a bunch of projects we want to make, and one or two might even get made. He’s got the years on his side, but I think I’m starting to realise that, like sports TV, making docos is a young man’s game. 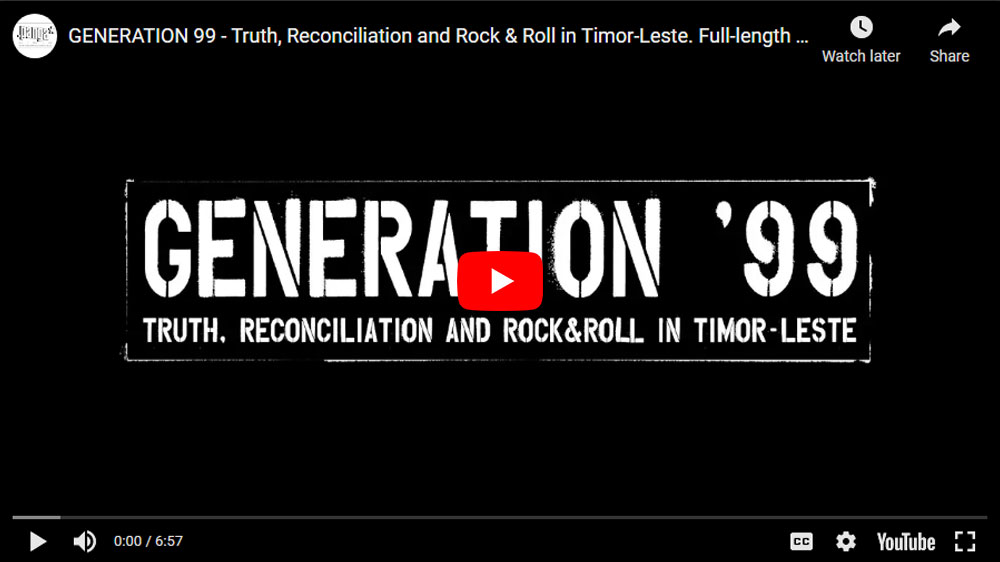